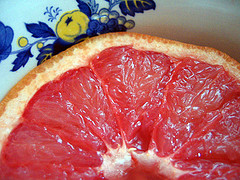 Can Grapefruit Increase Your Risk of Breast Cancer?

Sometimes the science behind food and cancer can get really confusing. After all, if we avoided every food that was ever suspect in a study we’d probably be stuck with bread and water. (Make that whole-grain bread.)

Still, when a U.S. study from the University of Southern California and the University of Hawaii looked at 50,000 post-menopausal women and found that eating just a quarter of a grapefruit daily raised the risk of breast cancer by up to 30 percent, women couldn’t help but ask the question: Have I just eaten my last grapefruit?

There’s an enzyme called CYP3A4 that’s apparently involved in breaking down estrogen. Grapefruit inhibits this enzyme, which allows levels of estrogen to build. Scientists have long known that higher estrogen levels are associated with breast cancer risk, so grapefruit could, theoretically, increase a woman’s chance of breast cancer.

This isn’t the first time grapefruit has found itself in a negative limelight. Scientists discovered a few years ago that the tangy fruit can affect the way prescription drugs are metabolized in the body, again, by inhibiting enzymes that break them down, thereby making the drugs more potent. People are now cautioned to avoid taking grapefruit juice with medication.

But then, in a clinical trial this year, researchers at the University of Chicago Medical Center found that combining eight ounces of grapefruit juice with the drug rapamycin (a potential cancer fighter) can increase drug levels, allowing lower doses to be given. The combination of the two was shown to be effective in treating various types of cancer.

As for the study on breast cancer and grapefruit, it’s not conclusive. Some problems include the influence of age on cancer risk, which wasn’t fully evaluated; and the fact that grapefruit juice was not taken into account. Even the researchers say more studies are needed.

In 2008, they got their wish: Another study appeared in the British Journal of Cancer with the opposite conclusion-no link between grapefruit and cancer. This time, they based their observation on the well-known Nurse’s Health Study, which has followed thousands of women in the U.S. since 1976. Here’s the kicker: Eating more grapefruit was related to a reduced risk of breast cancer in those women who had never been on hormone replacement therapy.

Who knows what we may find out in the future? For now, if you’re concerned, you can cut grapefruit to one-two servings a week. However, since it’s full of nutrients-including vitamin C, carotenoids, folate, potassium, and fiber-and since this latest study showed a protective effect, you’ll probably do your body good digging out that serrated spoon.

Do you have any great grapefruit recipes to share?

Photo courtesy of princess_of_llyr via Flickr.com.