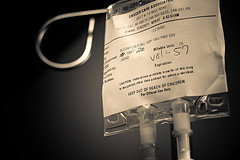 Bleomycin was one of the cancer drugs to appear on California’s new “toxic chemicals” list.

Could it be that a chemical used in treating cancer could also cause cancer? According to the latest list of toxic chemicals released by the state of California, amsacrine, a chemotherapy drug, is also a carcinogen.

A drug used in the treatment of acute adult leukemia, amsacrine (Amsidine®) was found to cause tumors in Wistar rats, according to a study by Graziano M.J. and colleagues, with tumors showing up on the skin and in the uterus, small intestine, mammary gland, and thymus. According to Dr. Zuck of healthline.com, the drug is no longer commercially available in the U.S., but still is in Canada.

Another surprise? Bleomycins-antiobiotics used in chemotherapy treatments-are also listed as carcinogens. Bleomycins, according to cancer.org, are antibiotics used to treat testicular cancer, lymphoma, and cancer of the head, neck, cervix, and other sites. The drug works by interfering with cell division. Nothing is listed in the side effects that indicates “carcinogen,” but some studies have shown tumor activity in rats. According to drugs.com, “The carcinogenic potential of Bleomycin in humans is unknown,” but “…Bleomycin has been shown to be mutagenic both in vitro and in vivo.”

Toluene-a chemical we told you about in an earlier post that’s found in some fingernail polish-also made the list as potentially harmful to the female reproductive system. Most of the other chemicals are those you’d probably suspect of being unhealthy, like those used in antifreeze, gasoline, paint, plastic, and foam products. However, a couple more were concerning, like those used in household pesticides and garden weedkillers, and those listed as HIV drugs.

If you’re finding any of these chemicals in your life, get rid of them if you can, or-as in the case of the drugs-ask your doctor. We’ve copied the complete list of chemicals below.

Have you had any negative experiences with these chemicals? Please share your story.