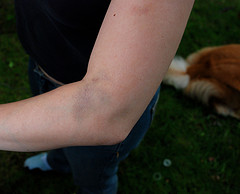 Bruising and Bleeding: Be Careful During Chemotherapy

Some of us, when going through cancer treatments, can end up looking like we’ve been in a bad fight. Of course, it’s not back-alley conflicts causing the problem, but blood platelets that just don’t want to stick together. In other words, a shortage of clots.

“I finished my last chemo,” says a fighter on inspire.com, “and my skin seems like it’s getting more and more fragile. My dog jumped on me, barely touched me, and I got a bleeding scratch on my leg. Today, I looked down at my arm and it was bleeding…”

Usually, if you’re injured, platelets in your blood stick together to help form a clot and stop the bleeding. Certain chemotherapy drugs, however, can inhibit or even reduce the number of those platelets-by affecting the bone marrow, where platelets are produced-making your blood run more “free” than usual, so to speak. Consequently, if an injury crushes the small blood vessels under your skin, they break open and leak blood more than usual, creating a bruise. Cuts bleed longer and more profusely, as well.

Aside from the unsightliness of carrying around a collection of bruises, reduced platelets increase your risk of dangerous complications from what would otherwise be considered “common” cuts or accidents, like nicking yourself shaving or banging your elbow against the wall. Breastcancer.org suggests you talk to your doctor, as he/she may have medications to help blood clot more readily. You may also want to avoid aspirin (and other NSAID anti-inflammatory drugs) and certain vitamins or supplements (like grape seed or garlic) that may increase your susceptibility to bleeding while going through treatment. (Go here for a more complete list of vitamins and herbs that can increase bleeding.)

According to Healthline.com, the greatest risk of this type of bleeding and bruising occurs during a period in your treatment cycle known as the “nadir.” You can talk to your doctor or nurse about this period and be more prepared to prevent injury during that time.

If you do get a bruise (or several), what can you do about it? Chemocare.com suggests applying ice to the area for 20-30 minutes, which will help shrink the blood vessels that may be bleeding. After 48 hours, switch to heating compresses, which will help the body reabsorb the blood. Instead of aspirin, use acetaminophen to handle any pain. If you cut yourself and the bleeding hasn’t stopped after five minutes, go directly to the doctor.

In the meantime, take a few precautions. Avoid sharp tools and objects until your platelet count comes back up. Use a very soft toothbrush, avoid forcefully blowing your nose, use an electric shaver instead of a razor, avoid tampons or suppositories, and avoid contact sports or other activities that may cause injury. Healthline.com suggests you talk to your doctor, as during your nadir period, you may need to even stop having intercourse.

Above all, watch yourself. If you experience any of the following (as noted by the University of Virginia), get to your doctor right away:

Have you experienced excessive bruising and/or bleeding during chemo? Please share your experiences.

Photo courtesy of Torrie via Flickr.com.