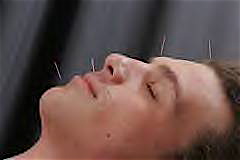 Ahhh…Acupuncture Relieves Many Chemotherapy Side Effects

There are a lot of us who just don’t like needles. Memories of childhood flu, vaccination, and tetanus shots are usually not that enjoyable. Yet acupuncture has shown in many studies to be helpful at lessening the side effects of cancer treatment. If you’re not a needle person, is it worth the trauma?

First of all-most people would not describe acupuncture as painful. According to the Chinese Learning Center, it’s “virtually painless.” In fact, most patients experience acupuncture as relaxing. The needles are very thin-about the width of a hair-and flexible. Nothing like those shot needles you may be thinking of.

Sensations vary from person to person, but can include an initial sharpness when the needle is first inserted (like someone pulling on a hair). Depending on the location and the insertion technique, however, you may not feel anything at all. Once the needle penetrates the skin, any sharpness should stop. (The depth the needle penetrates depends on the location and the problem being treated.) Once the needle is at its proper depth, sensations can include tingling, numb, achy, nervy, or nothing. If the patient feels a numb sort of heaviness-called “Deqi” by acupuncturist-it’s a sign the treatment is working. If a needle is uncomfortable, patients simply say so and the acupuncturist will reinsert in a slightly different location. According to most acupuncturists, most patients experience little to do discomfort.

Now that we’ve gotten past the needle issue, let’s talk about the benefits. Acupuncture has proven in studies to be an effective way to deal with cancer side effects. The National Institutes of Health says that, based on a review of 33 controlled trials, there is clear evidence that acupuncture helps with chemo-related nausea and vomiting. According to Johns Hopkins Holistic Medicine, recent research has shown that acupuncture can help with cancer-related fatigue and pain. Eleanor M. Walker, M.D., of the Henry Ford Health System in Detroit, reported that acupuncture was as effective for reducing breast-cancer-treatment-related hot flashes as the medication Effexor. Scientists at the University of Manchester, UK, showed that acupuncture held promise for relieving the crippling fatigue associated with chemotherapy. At the Memorial Sloan-Kettering Cancer Center in New York, patients are offered acupuncture as a routine part of their care.

How does acupuncture work? Chinese doctors believe the body has many energy-carrying channels, and that the needles help lift disruptions in these channels, rebalancing the body’s “Qi” (pronounced “chee”). Western doctors are more likely to talk about how needles stimulate muscle and sensory neurons, sending messages to the central nervous system, and releasing endorphins (natural painkillers) and other chemicals that modify nerve impulses.

If you want to try it, talk to your doctor. You can also check out the American Academy of Medical Acupuncturists (AAMA) or acufinder.com for a practitioner in your area. Diane Juswick, a licensed acupuncturist from San Diego, advises you to choose one who has been certified by the National Commission for the Certification of Acupuncturists (they usually have the title Dipl. Ac. after their name), and one who is a member of AAMA. Don’t be afraid to ask questions, like how long the doctor has been practicing, where she received her training, and the length and type of treatment she recommends.

Before your first treatment, get a good night’s sleep, and go in with a positive attitude-it can make a difference. Eat something light 2-4 hours before hand (don’t go on an empty stomach), and dress comfortably-needles may remain inserted for 30 minutes or more, so you want to be able to relax. Finally, make sure your acupuncturist opens a new pack of needles before treating you (they are sterile and disposable), and disinfects your skin with alcohol before insertion.

Have you found acupuncture helpful in dealing with cancer treatments? Please share your experiences.

Photo courtesy of Photography by Robbie via Flickr.com.