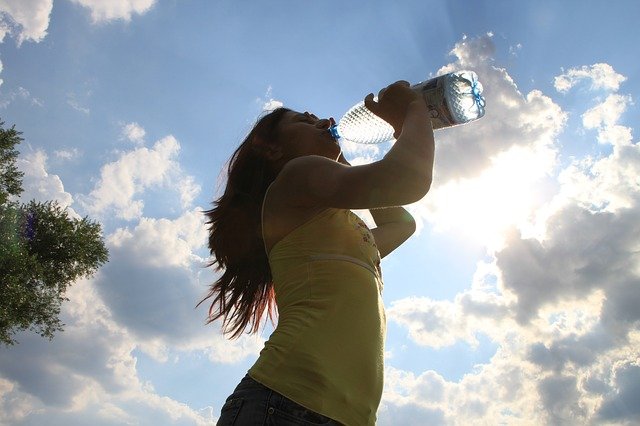 4 Reasons Why You Need to Drink More Water

Are you drinking enough water?

You may be confused about it. After all, we hear different advice from different sources. Sometimes we’re told to be sure we’re getting eight glasses a day. Other times, we hear about studies that suggest following our thirst is all that’s necessary.

I’m a firm believer in the miracles of water. When I drink enough, I feel more awake, have more energy, and enjoy more radiant skin. On those days when I’m rushed and find it more difficult to stop and enjoy a glass, my lips seem to chap more easily, my skin looks dull, and I get tired and cranky.

Plus I’ve seen a lot of research suggesting that we are much better off making sure we’re drinking enough every day than just ignoring the issue. Here are four reasons why.

A recent study found that when people increased their intake of water by just one percent, they reduced their total daily calorie intake as well as their consumption of fat, sugar, sodium, and cholesterol.

I mean, those are amazing results! To think that just by drinking a little more water you can make that big a difference in your diet is astounding.

This wasn’t a small study, either. Researchers looked at data from over 18,000 adults. People who increased their consumption of water by one, two, or three cups daily:

So if you want to improve your diet, drink more water!

Many of us have digestion challenges these days. Gas, bloating, cramps, diarrhea, and constipation can be your constant companions, particularly if you suffer from irritable bowel syndrome, inflammatory bowel disease, or just a sensitive gut.

Water can help. When you drink water, it helps dissolve fats and soluble fiber, which can ease digestion, reducing gas and bloating. It also helps to prevent constipation (as long as you’re drinking regularly), and helps prevent toxic buildup by flushing waste products out of the body.

Want to enjoy your meal even after it’s over? Be sure you’re drinking enough throughout the day.

This is one effect of not drinking enough that I usually notice right away: I start to drag. Turns out that fatigue can be a sign of dehydration.

In 2015, for example, researchers reported that a common cause of fatigue is a lack of enough water in the body. Researchers surveyed 300 general practitioners and found that one in five patients went to the doctor with symptoms like tiredness that could be caused by not drinking enough.

Dr. Roger Henderson, adviser to the National Hydration Council, told the Daily Mail that he regularly sees many patients who are tired all the time. “There are, of course, several reasons that could be causing this,” he said, “but a surprisingly common cause is that they are dehydrated.”

He added that people think they are dehydrated only when they start to feel thirsty, but that other symptoms of dehydration occur before that, including fatigue, tiredness, headaches, and poor concentration.

An earlier study found similar results. Researchers put two groups of women through a series of tests on their mood and cognitive abilities, both at rest and when exercising. Some were given enough fluids to remain optimally hydrated and some were induced into a mildly dehydrated state-at only 1 percent lower than optimal.

Results showed that those who were slightly dehydrated suffered from headaches, loss of focus, fatigue, and low mood.

Feeling tired and cranky? Go get a glass of water.

You know that your skin needs moisture to look it’s best, but it’s easy to focus only on products. The truth is that the skin needs hydration from the inside out, too.

In fact, when you’re dehydrated, your skin is more likely to look old and wrinkly. Fine lines are more noticeable, and the skin is more vulnerable to problems like dullness, acne, and redness.

In a 2007 study, researchers reported that drinking more water had a definite effect on the skin. Those individuals who didn’t drink much water before the study, but then drank 2.25 liters a day, showed a significant increase in skin thickness, meaning that the skin was healthier and more plump.

We have to remember that the skin is an organ, just like the heart and lungs. It’s made up of cells, and the cells need water. If the skin isn’t getting enough, it will get dry, tight, and flaky. It will also be more prone to wrinkling.

Sarah Smith, reporting in the Daily Mail, describes her own personal experience with drinking more water, which her doctor recommended. Not only did she enjoy a reduction in her headaches and a flatter stomach, she also was pleasantly surprised to see that her complexion improved.

“My complexion is improving,” she wrote after just two weeks of drinking more, “and my skin tone is more even. The blotches on my face are diminishing, and the shadows around my eyes are less pronounced.”

At week three, she stated that her skin looked “plumper and more nourished,” and by week four, she couldn’t believe the difference in her face. “I look like a different woman,” she said.

How to Work More Water Into Your Daily Routine

To help yourself to drink more throughout your day, try these tips:

Do you drink enough water every day?